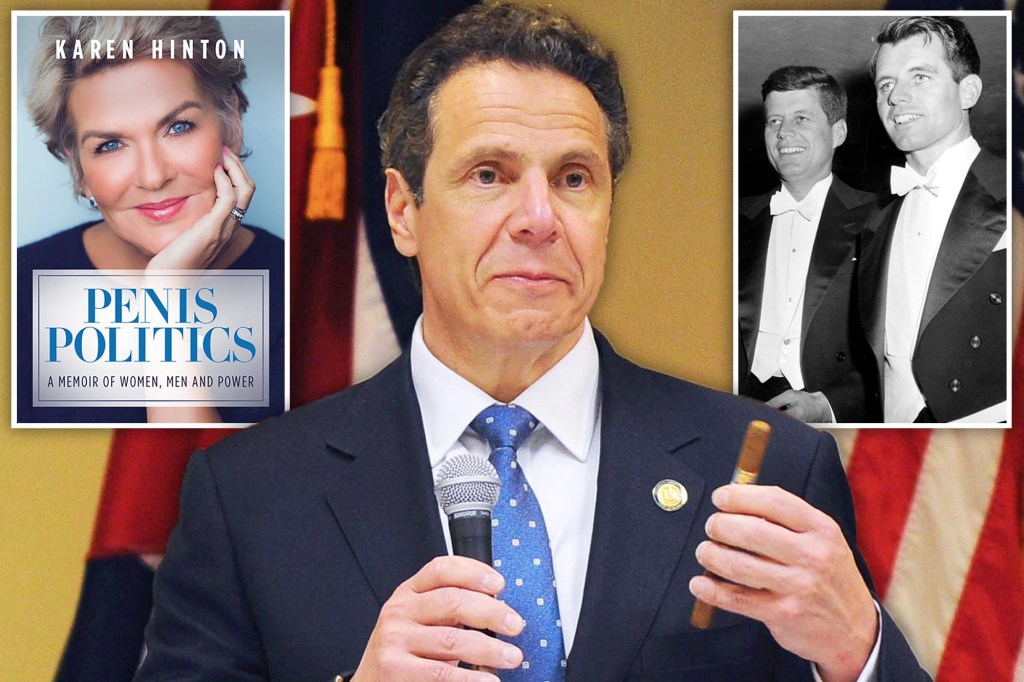 New York’s ex-creep-in-chief Andrew Cuomo lives up to the billing of his sex accusers in a scathing new tome by a female former press secretary.

An advanced copy of the book, which is due out Dec. 1, was obtained by The Post.

Hinton — who has previously accused an “aroused’’ Cuomo of  inappropriately hugging her in a hotel room — said the ex-gov had no problem joking about AIDS when laughing over the infamous cigar-sex incident between then-President Bill Clinton and White House intern Monica Lewinsky in 1998.

She said Clinton had once given the cigar-chomping Cuomo a box of illegal expensive Cuban smokes along with a note that said, ‘’Don’t ask … Don’t tell,’’ a nod to the president’s policy regarding gays in the military.

Hinton — Cuomo’s press secretary when he ran Clinton’s Department of Housing and Urban Development in 1997 — said her boss laughed about it in front of her and other staffers when news of the president’s cigar sex surfaced.

Waving around one of the cigars, Cuomo joked, “ ‘At least you can’t catch AIDS that way,’” she writes, adding that there was “an uncomfortable silence from staffers” after their boss said that.

He crudely joked about it after Clinton went on national TV in 1998 to claim he “did not have sexual relations with that woman, Miss Lewinsky,” she writes.

Cuomo was summoned to the White House along with other aides to advise Clinton on the sex scandal, Hinton said.

After the powwow, Cuomo told then-Energy Secretary Bill Richardson, “ ‘I think we can probably defend oral sex,’” the book says.

“ ‘But I have to draw the line’ — here he paused for effect —  ‘at Presidential ass f—ing,’ ” Hinton writes, allegedly quoting Cuomo.

She said Cuomo recounted the story to her and other staffers afterward.

A male Cuomo underling told her that their boss was smoking cigars with them on the roof of HUD when he told the Kennedy tale.

“ ‘The two of them,’ marveled Andrew, ‘are f—ing the same woman. She likes to get f—ed in the ass and some days she goes from one Kennedy house to the other to get it twice in one day,’ ” the tome quotes him as saying.

Cuomo married Kerry Kennedy, the daughter of Robert F. Kennedy, in 1990. The couple divorced in 2005.

Robert F. Kennedy Jr. adamantly denied the story to The Post on Tuesday.

“That is not true,” he said. “I never heard of such a thing. I don’t know Karen Hinton, and I don’t think Andrew would ever tell a story like that.”

Cuomo’s rep, Rich Azzopardi, added of Hinton’s book in general, “The closer she gets to publication, the more vile and ridiculous her claims get.

“In 2018, when Ms. Hinton was not consumed with chasing headlines to sell a book, she wrote: ‘I’ve been fortunate to have male bosses, like Andrew Cuomo and Bill de Blasio, who know how to be respectful of women even while being no-nonsense managers.’

“We will have no further comment on her transparent attempts to profit off of a blatant rewriting of history,” the Cuomo spokesman told The Post.

But Hinton — who also previously worked as a spokeswoman for Cuomo’s nemesis, New York City Mayor Bill de Blasio — said the former governor’s unseemly behavior extended to her, too.

She recalled working for Cuomo at HUD when he invited her to a meeting on Capitol Hill with Trent Lott, then a top Senate Republican leader.

She said that after the meeting, she went back to the office with Cuomo and he told the “boy brigade,” ‘I thought Lott was going to lean right over and lick Karen’s thigh.’ “

Hinton said she was humiliated.

Lott was unable to be immediately reached by The Post on Tuesday.

Meanwhile, Hinton also recounted her previous accusation that Cuomo was inappropriate with her when she was still married to her first husband, who was in the military, and worked for the pol at HUD.

On Election Day in 2000, Cuomo called Hinton to his room that evening to supposedly get updates on what was going on and to chat her up about her newly adopted daughter, she said.

She said the lights had been dimmed — and that Cuomo started asking personal questions about her marriage.

When she got up to leave, he put his hands on her shoulders and said, ” ‘Lets always help each other, yeah?’ ” Hinton writes.

She said he then held her tightly, and, “I could tell that he was aroused.” Hinton said she then fled.

Hinton, who is currently married to former top Cuomo aide Howard Glaser,  also recounted a previous claim she made about then-Arkansas Gov. Clinton. She has said Clinton made a pass at her while she was working for Mississippi  Rep. Rober Clark’s congressional campaign.

She said she was at a work dinner at Doe’s Eat Place steakhouse  in Greenville, Miss., when  Clinton walked over to her table and “shifted his focus” to only her.

Clinton then wrote something on a piece of paper. Hinton thought it was an autograph from Clinton,  but instead it was his hotel room number and a question mark. She left the table feeling “humiliated,” she writes.

Cuomo resigned as New York’s governor in August after a slew of women accused him of sexual harassment.

A damning probe by the state attorney general’s office backed up the women, saying Cuomo was guilty of engaging in “unwanted groping, kissing, hugging and making inappropriate comments” with current and former New York workers.

Cuomo was criminally charged by the Albany sheriff last month over allegations from one of his accusers, former gubernatorial aide Brittany Commisso, who says he groped her breast. The ex-gov was hit with forcible touching, a rap that carries up to a year behind bars.

But the Albany County district attorney requested — and received — a two month delay in Cuomo’s arraignment, arguing the sheriff’s charge was “defective.”Hinton’s book has already created controversy — although not necessarily over its contents.

Facebook took issue with its title because of its use of the word “penis,’’ banning it from the behemoth social-media site.

Previous Major Parts of Digital Studio Behind ‘Lord of the Rings’ Films to Be Bought by Unity Software for Over $1.6 Billion
Next ‘Healthy’ baby food can contain up to two teaspoons of unnecessary sugar, study claims