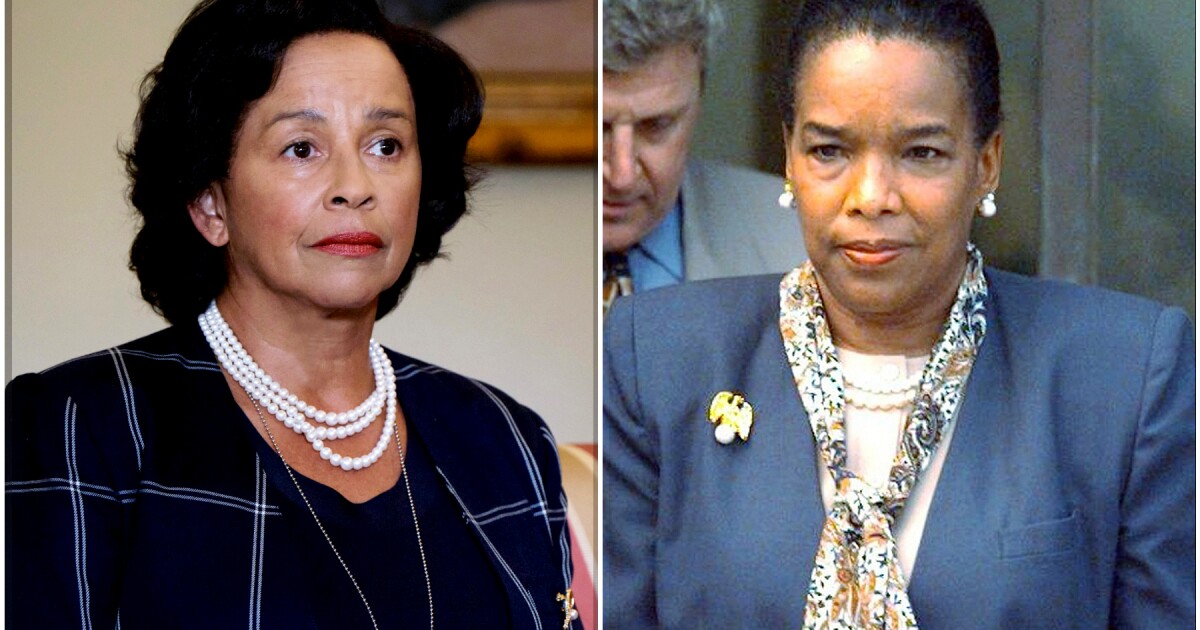 The following contains spoilers from Episode 10 of “Impeachment: American Crime Story.” Read our full coverage of the series here.

In Tuesday’s season finale of “Impeachment: American Crime Story,” titled “The Wilderness,” Betty Currie is seen only briefly, calmly navigating a morning of urgency as President Clinton and his advisors brace for the release of independent counsel Kenneth Starr’s explosive report to Congress that outlined a case for Clinton’s impeachment.

It’s easy to overlook her. Throughout the season, which relives the events leading up to the 1998 impeachment and the women caught up in the media maelstrom around it , viewers have gotten glimpses at Currie’s discretion and dedication in her role as the White House secretary during Clinton’s administration. Administrative aides are considered the most important person in an office, loyal gatekeepers who are often privy to confidential information, and “Impeachment” draws on Currie’s quiet influence to craft its portrait of her. Portrayed by Rae Dawn Chong, Currie, unlike the other women depicted in the series, does not have a singular dramatic moment, but her name is invoked again and again — in phone calls, interviews, grand jury testimony — to underscore that what she observed was crucial to the impeachment saga, and to the series’ narrative arc.

“She’s a huge part of this story,” says Chong, whose mother worked as an assistant to a high-ranking corporate executive. “She’s pretty present in the whole thing. You’re constantly hearing people say: ‘Well, Betty…’ or ‘Call Betty’ or ‘Did you reach Betty?’ or ‘Betty did this…” I was like, ‘Oh, this part was bigger than I thought. It’s an incredible lesson: If people are talking about you, you’re in it.”

Indeed, as the woman who sat outside the Oval Office throughout Clinton’s administration, Currie emerged as a key figure in one of the most infamous political sex scandals in American history, an intermediary in the affair between Clinton and former White House intern Monica Lewinsky.

“Betty Currie was in an impossible situation,” says head writer Sarah Burgess. “She was forced to navigate the president arranging to see this person [Monica Lewinsky], sometimes with or without her [Betty’s] knowledge, and Monica would call Betty because she couldn’t call Bill Clinton directly. Betty would field those calls and developed a relationship with Monica. Underneath all of that, of course, is the fear of anything about this coming out. And that shouldn’t be on Betty’s shoulders, but it was to some degree. … I really wish we could have gotten her testimony in the show, because there’s a famous photo of Betty having to be walked up to the courthouse and being just assailed by the press. A difference between Betty Currie and Linda Tripp is that Betty, it seems to me, was incredibly discreet and kept things very, very private; Linda, of course, did not make that choice, to put it mildly.”

Currie never wrote a book about her experiences during that period, so to create the dramatized version, Burgess relied on that grand jury testimony as well as Currie’s 2006 interview with the University of Virginia.

“I always wrote Betty from the point of view that she must want this to be contained,” Burgess says. “I think this is someone who felt loyalty and real affection for Bill Clinton, who by all accounts was really good to her, and so that must have been so frustrating on some level, but you don’t see or feel that at all. I just love all the complexities Rae Dawn brings to it.”

A Times piece on Currie in January 1998, “Clinton’s Trusted Gatekeeper,” looked at her role in the case that shrouded Clinton’s presidency, describing part of her job as “zealously protecting presidential secrets.” It quotes a White House official as saying: “She is a very trusted person. When you get paged, ‘Call Betty,’ it is an important page to return.”

Before she was put in the hot seat, as the Times detailed, Currie worked for nearly three decades across several federal departments, including the Navy, the Postal Service and ACTION, an agency that included the Peace Corps, retiring in 1984. After stints on the losing Democratic presidential campaigns of Walter F. Mondale and Michael S. Dukakis, volunteer work and a job at a Washington department store, she entered Clinton’s orbit by working for campaign strategist James Carville and transition leader Warren Christopher.. She was named Clinton’s personal secretary in January 1993.

The series establishes the dynamic that developed between Lewinsky and Currie, with the latter facilitating calls and meetings between the former intern and Clinton. Episode 4, includes a scene — inspired by a real-life incident in December 1997 — in which Lewinsky (Beanie Feldstein) shows up to the White House unannounced in hopes of seeing Clinton and an exasperated Currie tells Lewinsky he is unavailable, watching “G.I. Jane” with daughter Chelsea. Later, Lewinsky phones Currie at her home, irate over Clinton‘s unfulfilled promise to secure her return to the White House. Clinton, upon learning of the call, chastises Lewinsky for her treatment of Currie: “Who the hell do you think you are? Betty didn’t come up under the Jim Crow South to work in the damn White House and be yelled at by some … 24-year-old.”

“I watched the fourth episode. We only got the scripts that we’re in, so I never knew that he [Clive Owen as Bill Clinton] says: ‘You made Betty cry,’” says Chong, an industry veteran whose recent credits include “9-1-1″ and “Better Things.” “And I was really touched by that, because that was one of the underlying themes of my representation of her was her history, the fact that she’s a Black woman in an extremely powerful world. And just knowing that church ladies, they don’t get in other people’s business. You try to drink your tea but not someone else’s. And I feel like that to me was the main thread about Betty Currie, is her feeling of ‘hear no evil, see no evil, speak no evil’ … to a fault.”

‘This is a violation’

Given her proximity to the president and the nature of her job, Currie was seen as an important link in the allegations against Clinton for obstruction of justice.

Currie, along with other Clinton aides, was subpoenaed to appear before a federal grand jury. She made five appearances in Starr’s bid to investigate the nature of Clinton’s relationship with Lewinsky and whether either of them lied about it under oath or encouraged others to do so. Currie’s testimony became particularly crucial after Clinton’s deposition in the Paula Jones case, in which he was asked about Lewinsky, as it would allow prosecutors to compare testimonies and identify contradictions.

Her testimony revealed an aide who remained dedicated to her role. “Although her testimony provided Starr with key details of Clinton’s trysts with Lewinsky, prosecutors could never make her turn on her boss,” The Times wrote in Oct. 1998.

“She was criticized for saying she didn’t recall certain things,” Burgess said. “She was accused of protecting the Clintons.”

In Episode 7, in which Clinton prepares for his deposition before Starr’s prosecution team, Clinton sits Currie down in the Oval Office to get a sense of what she’s planning on telling Starr. Without saying so explicitly, he suggests what he expects her to say by asking her to jog his memory about his encounters with Lewinsky.

“I felt so violated as Betty when he comes at her,” Chong says. “I was just broken as her. I figured with her history and her dignity and her love and her intelligence, and then the awkward, horrible position that he puts everybody in, it was not that hard to figure out that this is a violation. So it wasn’t that hard to mine that. I think that she was really disappointed that he doesn’t take the high road.”

From the Starr report:

At about 5:00 p.m. on Sunday, January 18, Ms. Currie went to meet with President Clinton at the White House. She told the grand jury:

“He said that he had had his deposition yesterday, and they had asked several questions about Monica Lewinsky. And I was a little shocked by that. He asked me some questions.” According to Ms. Currie, the President then said to her in succession:

• “You were always there when she was there, right? We were never really alone.”

• “You could see and hear everything.”

• “Monica came on to me, and I never touched her, right?”

Life after the White House

After Clinton’s term as president came to a close in 2001, Currie mostly returned to a life of anonymity, living in Maryland with her husband and daughter. But her ties to the Clintons didn’t dissolve, in part because she adopted the family cat, Socks, when the president left office. (Socks died in 2009.)

Currie spent time working with local nonprofit organizations and was appointed to the Alcohol Beverage Board of St. Mary’s County, Maryland, in 2008. The same year, she returned to Washington to assist John Podesta, who had served as Clinton’s chief of staff, during his time facilitating then-President-elect Barack Obama’s transition.