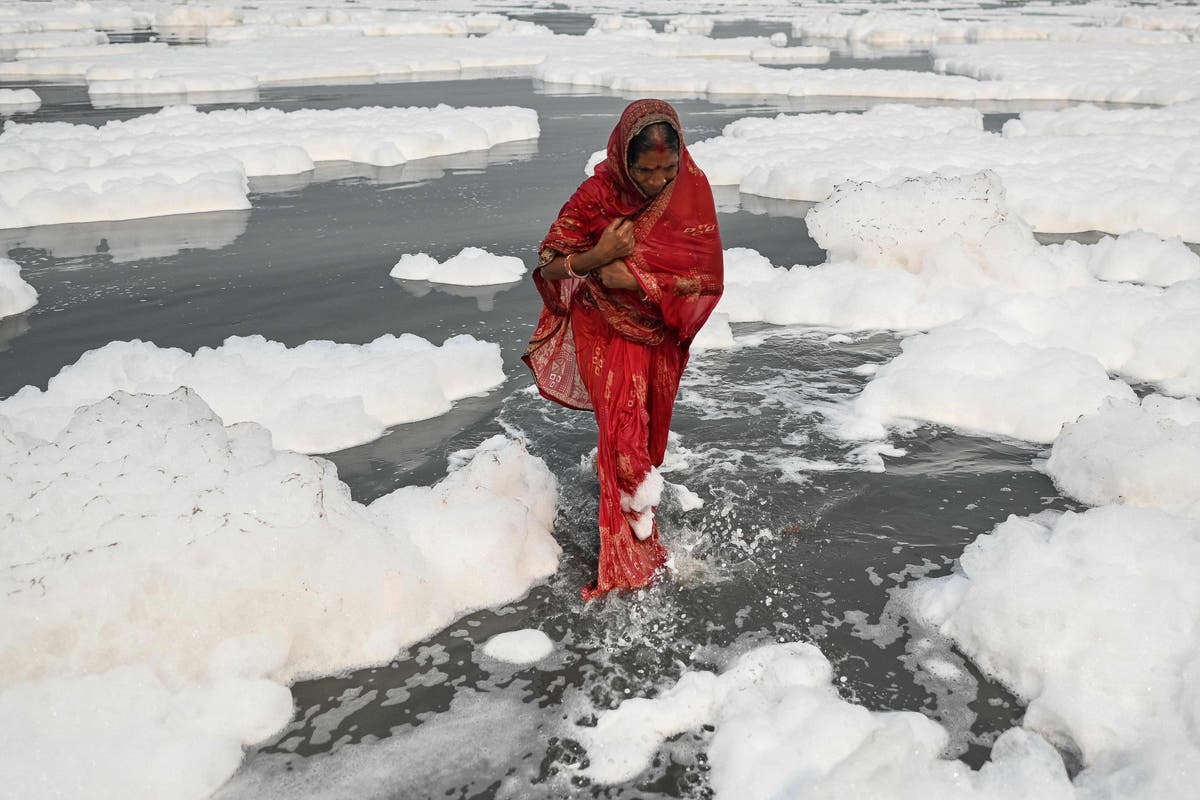 Images of Hindu women in India wading through a river full of toxic foam to observe a festival in New Delhi have gone viral on social media, prompting critcism by experts and the public about government inaction.

A layer of white froth floats over the Yamuna river in east Delhi this season, as it does every year, amid peak pollution levels in the Indian capital.

Environmental experts believe the Yamuna river’s toxic waste is likely to remain, even as authorities try their best, and fail, to dissuade devotees from venturing into the river.

The Yamuna is a holy river, and this is the time when hundreds of Hindu devotees flock to its shores near east Delhi’s Kalindi Kunj area to observe the northern Indian “Chhath Puja” festival that involves worshipping the sun.

The devotees, who are consistently photographed every year as they stand in the middle of toxic foam-laden water to offer prayers, are not ignorant of the river’s pollution.

They say they understand the health risk, but do not have any other option in order to observe the festival.

“We know that the Yamuna river water is dirty and it could be hazardous. But there is no option as prayers are offered to the Sun god while standing in flowing waters of a river,” a devotee at the Yamuna banks was quoted by the ANI news agency as saying.

The river has been polluted for years, and authorities have tried quick fixes such as adding barricades to stop the devotees from entering the river.

Authorities had a knee-jerk reaction to viral photos of the devotees this year as well.

One video shared by ANI showed a worker of Delhi’s water board, the Delhi Jal Board (DJB), attempting to sprinkle water into the river through a hose to “dissipate toxic foam”.

The measure has sparked criticism online from several Twitter users.

The causes or the formation of the hazardous scum in the river, however, are deep-rooted and unlikely to be curtailed by short-term measures.

The froth forms as a result of untreated or poorly treated water entering the river, including industrial waste and sewage from nearby areas.

The high amount of surfactants and phosphate in the river results in white, milky foam settling on the river surface. While it does not appear dirty at first glance, it can be hazardous upon contact, explained Sushmita Sengupta, senior programme manager of the water programme at Delhi-based nonprofit Centre for Science and Environment.

“Delhi doesn’t have the full capacity to treat the sewage water that flows into the river,” Ms Sengupta said.

Some river locations have been more susceptible to frothing than others depending upon the nature of the waste accumulated. Ms Sengupta said this phenomenon occurs in November because there is reduced water flow during this period.

“This is a lean period for the river where the water flow is less. Pollutants, therefore, are not diluted and form the froth,” she said.

Experts and activists have long demanded stricter action to clean the river.

Delhi’s peculiar political geography, however, results in the shifting of blame between different government departments.

The national capital, which is also a federal territory, is straddled between the two states of Haryana and Uttar Pradesh (UP). Delhi’s government claimed that if the toxic foam had appeared due to Delhi’s inaction, the entire river belt would have been polluted by now instead of just the eastern border area.

“Around 155 MGD [millions of gallons per day] of water reaches the Okhla barrage with all sorts of waste, industrial discharge, chemicals and detergents. Of this, 105 MGD is released by the Haryana government into the Yamuna through the Najafgarh drain. The remaining 50 MGD is released by the UP government,” said Raghav Chadha, a member of the ruling Aam Aadmi Party government and the vice chairman of the DJB.

“The water falls from a height, so the untreated waste turns into foam. We have written multiple times to the UP government to treat the water before releasing it, but we keep seeing this,” Mr Chadha added.

Several planning committees have been formed and multiple reports have been filed over several years outlining ways to clean the river.

Many clean-up programmes, involving funds worth millions of rupees, have also been launched. Toxic foam, however, continues to float in the area, with devotees entering it during festivals.

“A holistic plan was made in 2015 to clean up the river and banks but an actual change in the quality of water has not been witnessed. We hope that in the future the steps from the plan are implemented,” Ms Sengupta added.