What happens when CDOT is responsible for a wreck? 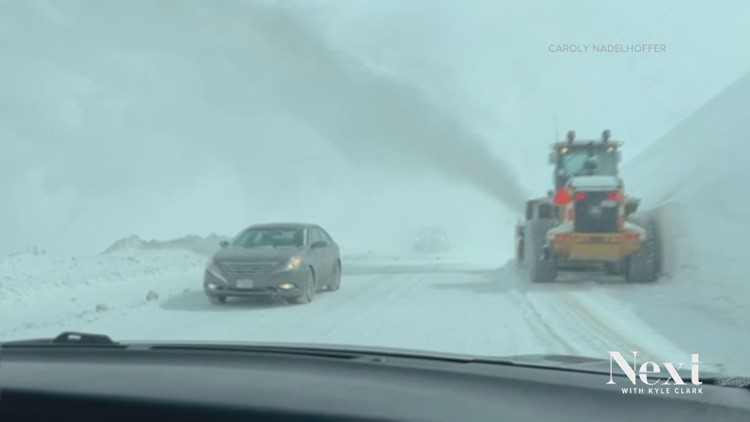 DENVER — Driving in the mountains in the winter comes with risk. (Maybe it’s a good time to mention we’ve got more snow coming this week.)

The Colorado Department of Transportation (CDOT) closed Loveland Pass on Saturday because of high winds and blowing snow — a day too late for a couple of drivers who blame CDOT for their accident on Loveland Pass.

“It was pretty windy, blowing snow quite a bit. Then, all of a sudden, everything went dark. [I] thought I got hit by an avalanche, didn’t know what it was, and then ‘bam,’ hit the guy in front of me. And then people behind me, ‘bam, bam, bam,'” said driver Dylan Rupe.

Rupe rear-ended Lena Hyre, who was driving back to the metro area with her friends from Butler University in Indiana.

“I wanted to give them a nice scenic route, I guess, before they left,” said Hyre.

Caroly Nadelhoffer was in the passenger seat of a vehicle going westbound on U.S. 6. She snapped a picture of a CDOT plow blowing snow up and over the vehicles coming eastbound.

“The road, when I was on it, was pretty much completely fine,” said Hyre. “The biggest issue was just that they were sending the snow, like completely into my lane, so I obviously couldn’t see anything.”

“Just no warning and no way to avoid it,” said Rupe. “They should have some kind of accountability for this type of thing.”

What can these drivers do about it?

“You’d have to prove liability on the part of the state,” said Doug Platt, spokesman for the state’s risk management office.

There is a claim form that drivers can fill out online to seek repayment by the state.

Be warned, it is a difficult bar to reach.

Last year, the state received 140 claims by drivers who wanted the state to cover damage as a result of potholes on state highways. The state paid zero of those claims.

That is because for the state (or city) to be considered liable, the pothole would have to be known, reported and not fixed.

“The governmental immunity act asks that the state repair potholes within a reasonable period of time,” said Platt. “The state has to know a pothole exists, and then of course, a reasonable amount of time varies from circumstance to circumstance.”

In the city of Denver, the Department of Transportation and Infrastructure said that it repairs potholes within one-to-three days of being notified.

In the last two months, Denver 311 has received 739 reports of potholes in need of repair.

Denver claims can be made with this form.

“I’m pretty pragmatic. You hit a pothole, you know what happens, but this type of thing seems very avoidable to me,” said Rupe regarding his Loveland Pass accident.

Last year, the state received 93 claims regarding accident liability, meaning a crash involving a state employee, and the state paid out 59 of those claims.