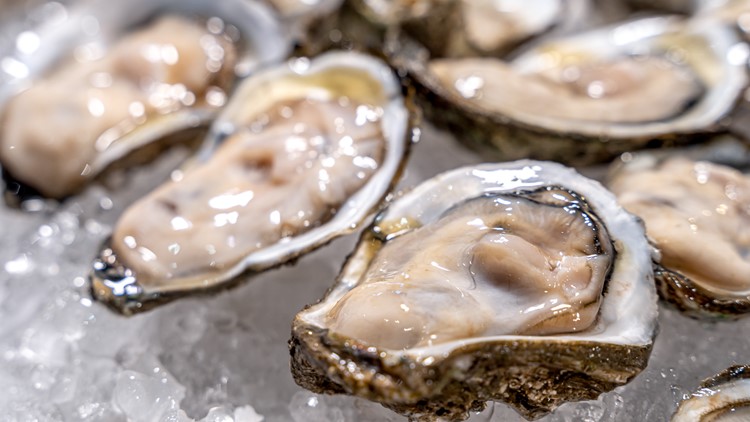 At least 103 norovirus illnesses have been reported in 13 states.

FLORIDA, USA — Florida is among more than 10 states currently involved in a norovirus outbreak that investigators are linking to potentially contaminated raw oysters harvested from British Columbia.

Public health officials are warning restaurants and retailers not to serve or sell raw oysters from or near the south and central parts of Baynes Sound, British Columbia and Canada.

The U.S. Food and Drug Administration, the Centers for Disease Control and Prevention, the Public Health Agency of Canada, the Canadian Food Inspection Agency and state and local partners are investigating the outbreak. Since April 6 there have been at least 103 reported illnesses, the CDC reports.

This includes oysters harvested as early as Jan. 31, 2022, within British Columbia: BC 14-8 and BC 14-15, which would be printed on product tags. Public health officials are urging consumers in the affected states who might have oysters that fall in this category to throw them away and to clean any utensils or surfaces that may have touched the oysters.

If you think you may have gotten sick from eating possibly contaminated raw oysters, the CDC says you should talk to your healthcare provider and report your illness to your local health department.

Symptoms of norovirus include diarrhea, vomiting, nausea, and stomach pain. Norovirus symptoms usually occur 12 to 48 hours after exposure. There is also a risk of dehydration.

Public health officials say norovirus is the leading cause of foodborne illness in the U.S. The investigation is ongoing and health officials will provide updates as more information is gathered.