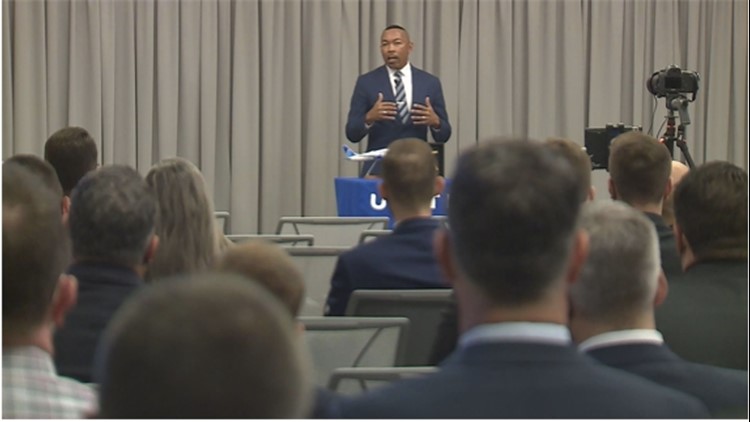 Whether it’s the loss of a loved one, divorce or anxiety, handling “human factors” is at the forefront of United’s Flight Training Center in Denver.

DENVER — In January, new captains and first officers patiently awaited their names to be called during a “wings ceremony” at United Airlines’ Flight Training Center in Denver.

The pilots in the room will face, and in some cases continue to face, the utmost responsibility to make sure passengers get from point A to point B safely.

But first, they had the chance to hear from a man whose job it is to make sure the pilots are not only skillfully ready, but mentally ready as well.

“But I want to help you bring your promise to this flight deck, to your crew, and to that community in the back that you sign for, and you’ve taken responsibility for,” Rob Strickland said to the new employees.

Strickland, a former boxer and Air Force Academy Graduate, is now the Senior Manager of Human Factors and Pilot Development.

The position, which he’s held since 2014, deals with how a pilot interacts with their environment, and how to be effective in an environment that may be impacted by things that happen in and out of the cockpit.

Sometimes, those factors could be something that happens in a pilot’s personal life.

“If you ever go out to the airport, you see what some may call a ‘mass of humanity,’ people just trying to go from one place to another. The important piece of that is the humanity. They’re humans — and the pilots are humans as well,” Strickland said in an April interview.

As required by the airline, pilots for United come to its Flight Training Center in Denver to make sure their performance hits the airline’s standard for whichever aircraft they’re flying.

The center has bays with several flight simulators.

“Although the FAA says that if you can fly one of those, you can fly the actual airplane, the thing that’s missing is the two hundred people in the back and the responsibility for their lives,” Strickland said.

It’s the human factor that Strickland has worked to implement in the airline’s training, which includes developing a briefing between crew members and listing out “threats” that may exist ahead of a flight, including personal threats.

“Anything that may have you bring a less than excellent version of yourself to the flight deck. We need to talk about that because we may not be perfect individually, but collectively, you know, as a crew, we want to be perfect. We can never be less than excellent,” he said.

Some of the training is borrowed from the Navy SEALs, which include techniques that are supposed to be implemented in a stressful situation, including different breathing techniques.

Because every United Airlines pilot has to come through the Flight Training Center every nine months, Strickland says there’s a unique opportunity to identify pilots who may be struggling.

“Every once in a while, if their performance is less than what we’re used to seeing, it stimulates a conversation. And typically, that’s when we find out that they’ve had maybe a death in the family or they’re going through something — a divorce or something that impacts their overall stress level,” he said.

Sometimes, those problems could include pulling a pilot off a flight schedule, or a trainee out of training, to receive the support needed to get through whatever could be causing the elevated stress.

“We spend some time with that pilot on an individual basis to ensure that they have the mental strength and fortitude and resilience to kind of bounce back from perhaps a mistake that they made or something that was going on in their life that they needed to deal with before we feel mutually comfortable that they’re going to be able to go out,” he said. “And once those are locked down, then we bring them back into training and continue. Sometimes their chief pilot may take them out of the flying schedule in order to allow them to handle some of those personal issues as well. We do whatever it takes. We treat the pilot as a person as well as a professional.”

Strickland explained that the team consults with doctors and therapists, and that there are also established relationships with those types of agencies that they reach out to when their expertise on handling factors in the cockpit exceeds their ability to train.

“We all know that stress is cumulative. So when you bring those things to training or you bring them to the flight deck and then something else happens, you may not be able to reach your maximum performance. So we identify those things. And then my team will refer out, if necessary, to the Airline Pilots Association, for example, to our United Medical Department or whatever may be appropriate to intervene,” he explained.

In one instance, Strickland shared a story of how he worked with a new hire pilot who was “absolutely the type of person” they wanted working for United.

“And had some anxiety when it came to his checkride. And he was really, really super excited about being here and put a little bit of extra pressure on himself,” he recalled. “So we intervened, provided some resilience training, gave him some tools to identify those stressors and provide some ways of dealing with it so he could be effective under pressure. And I recently got an email from him saying ‘I was successful with the checkride, and I’m standing by to fly the jet.'”

The program, Strickland says, has provided a shift in the creation of what they call “psychological safety.”

“So that our pilots feel comfortable raising their hand, saying, ‘You know what, I don’t think I feel I can bring my best self.'”

Overall, it’s a very small percentage of the estimated 13,000 pilots that have to engage with Strickland’s team, but it’s an important percentage, as the responsibility of keeping people safe during flight, depends on it.

“So if that happens, we want to make sure that we’re ready to provide the exact intervention that they need in order to go out and fly the jet,” he said.

RELATED: Colorado wildfires continue to trigger PTSD, but there are ways to cope