Public can look at election ballots with new online tool 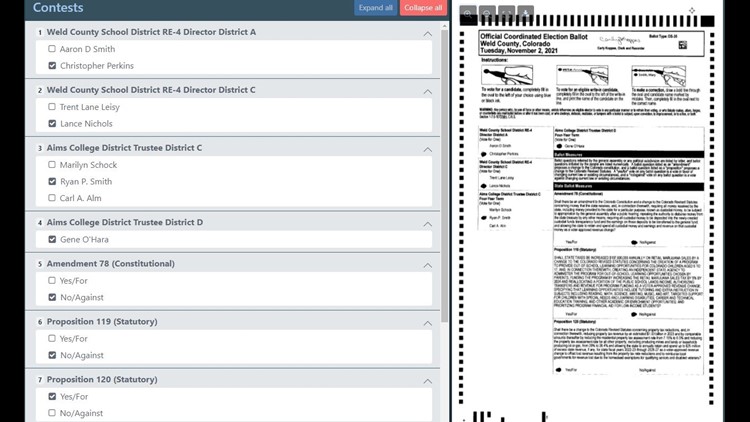 Three counties are using an online tool allowing people to see every ballot cast and how the ballot corresponds with the way it was recorded by the ballot machine.

The Ballot Image Audit Tool is available to anyone online after creating a username and password. In Weld County, the tool allows people all of the 64,000 ballots cast in the 2020 election.

The goal of the tool is to allow people to see every ballot cast and how the ballot corresponds with the way it was recorded by the ballot machine. It also shows which ballot and choices were adjudicated, meaning which ones were looked at by the human eye because the machine could not clearly decipher them.

“It’s all out there for the public to go and see, so that they can make sure and gain confidence in the elections,” said Republican Weld County Clerk Carly Kappes, who continues to receive questions over the legitimacy of the election results.

Kappes said she has been able to point people to the tool to verify the results themselves, which she hopes will help them to verify their concerns.

“It has been something that I have had people go and look at,” said Weld. “I can stand here all day. I can have those conversations with people that have the questions, but really at the end of the day, I want to provide them the tools for them to verify what I am saying.”

RELATED: Judge dismisses lawsuit that would have blocked unaffiliated voters from participating in primaries

The tool does not provide the identity of who cast the ballot. It also does not allow individuals to access their own ballot that they cast.

“We will never be able to show your individual ballot because then we would be breaking the law as having your ballot as secret,” said Weld.

The tool in Weld County went live in January after the election results were certified.

The Colorado County Clerk’s Association, of which Weld is a part of, hopes to expand the access to the program more widely across the state. They hope to have the Secretary of State’s office and the legislature allocated funding for all 64 counties. Additional funding would allow greater access to this form of transparency across the state.