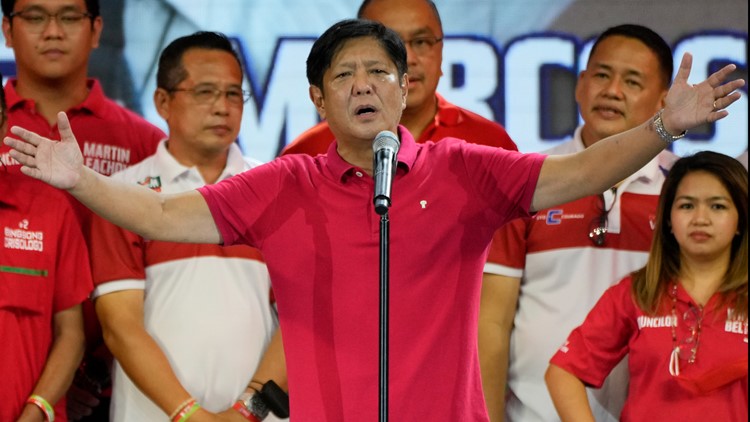 The message the younger Marcos is sending whitewashes the past, while offering vague promises for the future. But it appears to be resonating with Philippine voters.

MANILA, Philippines — Ferdinand Marcos Jr. and Sara Duterte smile and chat of their love of burgers and mango shakes on the election trail in a carefree YouTube video before breaking into a short rap penned for their campaign for president and vice president of the Philippines by a popular singer.

Marcos Jr., the son of the late dictator who bilked the country out of billions and ruled for years with an iron fist, and Duterte, daughter of outgoing populist President Rodrigo Duterte, whose brutal anti-drug campaign has brought an investigation of crimes against humanity by the International Criminal Court, like to keep things light.

Their carefully choreographed campaign whitewashes the past and is short on specifics about their vision for the future, but it appears to be resonating with the average Filipino, with the latest polls showing both with seemingly insurmountable leads in their races, which are held separately, in Monday’s elections.

The campaign has made deft use of social media, primarily TikTok and YouTube, to push the simple slogan of “unity” — “Uniteam” as they put it — and frame them as beyond politics and disagreements, said Adele Webb, a lecturer at the Queensland University of Technology and author of ”Chasing Freedom: The Philippines’ Long Journey to Democratic Ambivalence.”

“His message really is very well crafted with this avoidance strategy,” Webb said. “Let’s stop talking about the past, let’s stop fighting about what those martial law years really looked like, and let’s look forward, let’s move forward.”

Ferdinand Marcos Sr. was ousted in 1986 as millions of people took to the streets in the largely peaceful “People Power” uprising to force a return to democracy.

Some of the assets obtained by Marcos, wife Imelda and their cronies were later seized and sold, with the money remitted to the Philippine government. The Presidential Commission on Good Government, created to recover ill-gotten gains, says it has so far collected more than $3.3 billion.

But rather than apologize for his father’s excesses, Marcos Jr., who goes by his childhood nickname “Bongbong” or “BBM” in campaign posters, embraces his image. The 64-year-old portrays his father’s decades in office as a time of prosperity and national pride, glossing over the corruption and years of martial law with a harsh crackdown on dissent that scarred generations of Filipinos.

“He’s just projecting a youthful version of his father, because he’s really banking on the Filipinos’ … nostalgic craving of Marcos rule,” said Andrea Chloe Wong, a political scientist. “They want to visit the golden age of the Philippines — and that’s what Marcos is propagating.”

With the median age in the Philippines of about 25, Marcos has taken advantage of the fact that many voters have no personal memory of his father’s rule. He’s avoided confrontation by refusing head-to-head debates, hand-selecting the journalists for the sole press conference he has held since his campaign started, and has limited the number of interviews he has given.

In one of those — with CNN Philippines a week ago — Marcos defended his family’s opulent lifestyle, saying his parents always reminded him that “any comfort or privilege that we enjoy comes from the people, and that’s why we have to serve.” He brushed aside criticism of martial law, saying “there were people who wanted to bring down the government and the government had to defend itself.”

“This is actually true, that was what really happened,” he said emphatically.

The rehabilitation of the Marcos name started decades ago, with the family returning to the Philippines — and politics — only a few years after Marcos died in 1989 in exile in Hawaii.

Imelda Marcos — whose expansive collection of jewelry and 1,220 pairs of shoes shocked the world after they were discovered in the presidential palace that was stormed in the uprising — ran for president herself in 1992 and 1998, losing both times.

The 92-year-old, who still lives in Manila, had faced some 900 civil and criminal cases after her return — from embezzlement and corruption to tax evasion. Most were dismissed for lack of evidence, and the few convictions were overturned on appeal. A 2018 graft conviction remains on appeal.

Marcos Jr. has held several political offices, including being elected to the House of Representatives in 1991 and the Senate in 2010, despite ongoing legal issues.

He has been dogged by a past conviction for failure to file his income tax papers and a government demand for a huge estate tax payment, which opponents unsuccessfully tried to use to disqualify his bid for the presidency. The petitions against his candidacy remain on appeal and could reach the Supreme Court.

Outside the Philippines, a U.S. District Court in Hawaii in 2011 found him and his mother in contempt of an order to furnish information on assets in connection with a 1995 human rights class action suit against Marcos Sr., fining them $353.6 million. That has never been paid, which could complicate any future possible visits to the United States if he is elected.

Rodrigo Duterte, in the first year of his presidency in 2016, helped the family gloss over its past, allowing the burial of Marcos in the country’s heroes’ cemetery, which had been blocked by previous administrations. The funeral with full military honors was condemned by human rights and left-wing groups.

By pairing up with 43-year-old Sara Duterte, Marcos has been able to combine his family’s support in their northern home province and hers in the south to both of their advantage.

At the same time, there have been allegations — which Marcos denies — that he has enlisted an army of online trolls and commentators to smear his opponents and revise his family’s history.

The approach has worked so far, with Marcos and Duterte, who is the mayor of Davao city, each with about 55% support in the most recent polls.

Marcos’ biggest challenger, Leni Robredo — the current vice president who defeated Marcos in his bid for that office in 2016 — has mobilized a groundswell of support against him and has drawn huge crowds with a message of reform and corruption-free governance, but she is still polling at less than half his number.

The vast majority of the country’s 67 million registered voters are working class, and despite both being part of longtime political families, both Marcos and Duterte have been polling as well — or better — among them as with the upper classes.

Many have bought into Marcos’ version of history, and also feel that the reform-oriented governments that came after Marcos Sr. failed to deliver, Wong said.

About a quarter of the population lives in poverty, government agencies and courts are seen as too weak to prosecute corruption and the gap between rich and poor remains wide. For many, good education is unaffordable and decent jobs found abroad.

Many of the ills besetting the Philippines can be traced to Marcos, who took huge loans that he could not repay to keep the country afloat while his regime imprisoned and tortured opponents and spurred rebellions — but that is carefully avoided in his son’s election narrative.

“People are fascinated, not of him per se but of the memory of his father’s rule,” Wong said. “A lot of the young people didn’t experience it but because of the propaganda being repeated over and over again, they think the Philippines was better off before.”

At a recent rally in a Manila suburb, Shirley Quirit, a 38-year-old mother of five, was one of several thousands who turned out to see Marcos Jr. in a rally heavy on glitz with giant television screens, celebrities and a rock band.

She brushed off concerns about his past as being from people “just trying to destroy them” and said there was nothing that could change her mind to vote for him.

“If the allegations they are hurling against BBM are true, they should have raised them a long time ago, not now when he’s running,” she said despite longstanding cases involving Marcos. “The Marcoses have accomplishments from before that still benefit people, like hospitals, schools, foot bridges … and he may do so much more.”

Even though challenger Robredo’s ”pink revolution” movement, named for the color worn by her volunteers, is trailing in the polls, it does show that if Marcos wins and slides into his father’s old ways, a significant portion of the population could push back, Webb said.