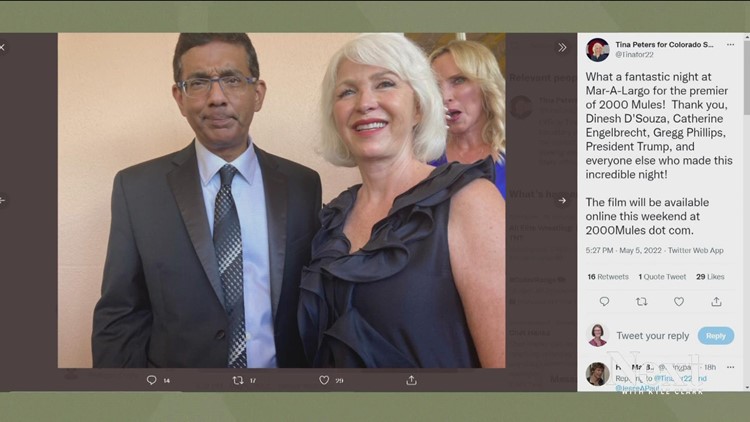 DENVER — A grand jury indictment did not impede GOP Colorado secretary of state candidate Tina Peters’ ability to travel to Florida for a movie premiere at Mar-a-Lago.

District Attorney Dan Rubenstein, who covers Mesa County where Peters is clerk and recorder, said Peters has permission to leave Colorado on a case-by-case basis with court permission.

“While I have some concerns about Ms. Peters as a potential flight risk, due to her access to private flight travel and history of going into hiding during this investigation, I must balance the importance of assuring her appearance in court against the risk that her bond conditions do not improperly influence the upcoming election. I struck that balance by asking the court to allow travel provided she gave details about her whereabouts when out of state,” Rubenstein said via email.

Peters on Thursday tweeted she went to former President Donald Trump’s resort in Palm Beach to screen “2000 Mules.” Fact-checking site Politifact describes the film as this:

“2000 mules,” a new documentary from a right-wing filmmaker with a history of spreading false claims, promises to give evidence to millions of Americans who believe something went wrong in the 2020 election.

The trailer for Dinesh D’Souza’s movie resembles a sci-fi flick, set to dramatic horror movie music with grainy video footage of what appears to be people dropping off ballots at ballot drop boxes.

The trailer suggests a nefarious conspiracy in which so-called “mules” – people it defines as collecting and returning completed mail ballots – submitted ballots en masse. The movie’s allegations are based on surveillance footage of ballot drop boxes and cell phone tracking data.

What a fantastic night at Mar-A-Largo for the premier of 2000 Mules! Thank you, Dinesh D’Souza, Catherine Engelbrecht, Gregg Phillips, President Trump, and everyone else who made this incredible night!

The film will be available online this weekend at 2000Mules dot com. pic.twitter.com/grTvQRqzQ5

Peters frequently champions the conspiracies surrounding the 2020 election. In her capacity as county clerk, she is also accused of allowing an unauthorized person to access Mesa County’s Dominion Voting software last year. Passwords for the Dominion machines ended up online.

Peters was indicted on 10 criminal charges, including seven felonies, all stemming from allegations that she tampered with election equipment.

Rubenstein previously requested that Peters not be allowed to travel because of the criminal charges, citing her exit from the state after details of the data breach went public.

Colorado Congresswoman Lauren Boebert (R) also attended the movie premiere, as did Coloradan Jenna Ellis, an attorney who worked on the Trump campaign.

Peters is next scheduled to appear in court on May 24.

Former Illinois Gov. Rod Blagojevich, who served prison time in Colorado for corruption charges, will headline a fundraiser for her on May 14 near Morrison.