Baby formula shortage: What you should and shouldn’t do

How to get more free COVID tests

When should I get another COVID booster? 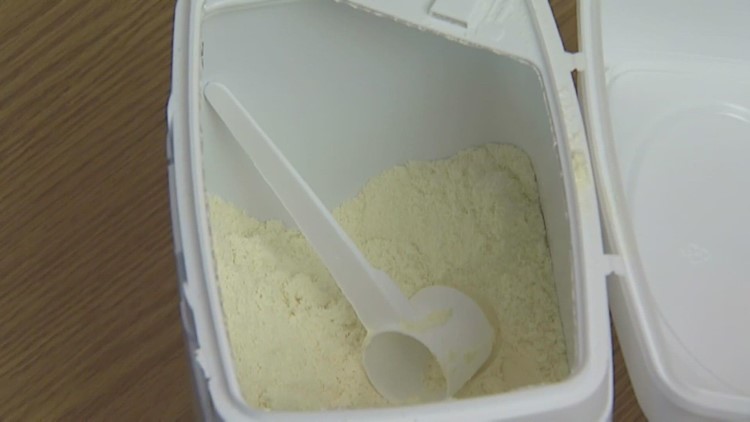 DALLAS — Finding baby formula is getting harder. Recalls have led to supply shortages and empty shelves.

Retail-tracking group Datasembly found that the nationwide shortage fluctuated between 2-8% during the beginning of 2021. In January 2022, the national out-of-stock levels climbed to 23% and increased further to 40% between April 3 and April 24.

Dr. Christina Sherrod, a pediatrician with Cook Children’s Southlake, told WFAA that parents are calling her as they struggle to find formula.

“Parents are really stressed right now,” Sherrod said on Thursday. “In the last 24-48 hours, I’ve heard from four patients who said they’ve been to eight stores and there’s not a single formula there.”

While not all mothers can produce breast milk of their own, many are turning to help amid the formula shortages.

Cleo Marchese, a internationally board certified lactation consultant (IBCLC) with Natural Beginnings, said the number of new clients she has helped recently has increased.

“They cannot find formula. They’ve become desperate,” Marchese said. “There has been a sharp uptick of about 30-40% interest in mothers who did not plan to breast feed that are now interested in re-lactation and learning to breast feed.”

Before the formula shortage, Marchese said she received requests for help from a few moms annually, now, it’s several calls per day.

CeCe Shyne, a Mesquite mother of three, never planned to breast feed her 1-month-old daughter, but that quickly changed.

“Because of the shortage, that’s what made me decide,” Shyne said. She received help from a lactation consultant who helped her begin producing breast milk after her daughter’s birth.

“Pediatricians and the American Academy of Pediatrics strongly advise against using homemade formulas,” Sherrod said. “There are formulas circulating around, but that doesn’t mean they’re safe.”

Sherrod told WFAA that homemade formulas can lead to infections that can become deadly.

“Not only can you cause infection in your baby that goes through their guts and goes into their bloodstream and can kill them, but you can also mess up their electrolytes and that can cause seizures,” Sherrod said.

According to the Food and Drug Administration, obtaining human milk from individuals or through the internet can risk the donor wasn’t adequately screened for infectious disease or contamination risk.

The FDA says you should only use milk from a source that has screened its milk donors and taken other precautionary measures to ensure its milk is safe.

Sherrod recommends opting for a similar formula if possible. If that option isn’t available, Sherrod urges parents to see a pediatrician.

Often times, pediatricians can provide parents with cans of formula to get them through, according to Sherrod. For children nine months or older, Sherrod said whole cow’s milk is safe in emergency situations. However, she advised against the use of goat milk, almond milk or any other milk substitute for babies.

A spokesperson for Texas WIC told WFAA the supplemental nutrition program “has seen an increase in calls from families seeking assistance locating formula and clients at WIC clinics asking for help with formula.”

As a result, Texas WIC announced it is providing families with: