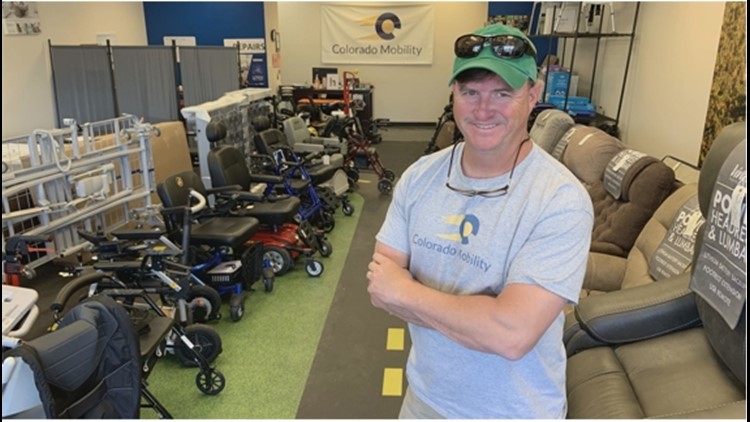 DENVER — When Pat Abernathey was running his non-medical home care business, he noticed a problem.

“There’s a big need for repairs in the elderly community especially, but also in the disabled community,” he said. “With the ability just for someone to come to their house and repair their equipment, whether it be a walker, a wheelchair, a power piece of equipment, a scooter or an electric wheelchair or a hospital bed is kind of rare.”

Wanting to meet that convenience, he opened Colorado Mobility, which repairs powered wheelchairs, scooters, and more both in-house and on-site.

But even with that, he noticed another roadblock for him.

“Certain manufacturers using durable medical equipment classification only work with certain repair providers, and that limits what consumers and independent repair shops like myself can provide to customers,” he said.

Among other things, House Bill 22-1031 requires manufacturers to provide parts, software, tools, repair manuals and more to both repair shops like Pat’s, and actual owners of the powered wheelchair.

If they don’t, it’s considered a “deceptive trade practice” which could land them a fine.

Abernathey believes it could solve a lot of problems for the people he works with.

“If we get a lot of calls from people with bigger, what are called ‘technical chairs’, who need certain parts and they need them in a timely manner,” he said. “And we’re not able to help them all the time because some of those manufacturers limit our ability to get parts or our ability to get technical details or anything like that.”

There was some opposition to the bill, including from the National Coalition for Assistive and Rehab Technology. They wrote in a letter of opposition that it could pose safety risks.

“Establishing an environment that allows untrained individuals without the specialized skills necessary to safely service these complex medical devices exposes individuals to risks and injury,” the letter reads in part, going on to say, “If owners negligently or recklessly tinker with devices, the bill does not protect the owner, or shift liability to the manufacturers.”

The Colorado BioScience Association told 9News in a statement:

CBSA thanks the bill sponsors for the robust dialogue on this legislation. Our members are health innovators from across Colorado who work to save and change lives around the world. Our primary concern with state right-to-repair legislation, such as HB22-1031, is the potential for interference with federal regulations. The U.S. Food and Drug Administration (FDA) already regulates medical devices, including powered wheelchairs. Federal rules on medical device servicing and repair are designed to protect consumer safety.

While Abernathey understands those concerns, he believes the open access could allow more repair shops to open.

“The market’s going to adjust for that because if someone makes faulty repairs, people are not going to choose them on a regular basis,” he said. “And at the end of the day, consumer choice is always good and more consumer choices is good. Allowing the marketplace to open up will actually … the market will take care of itself at some point.”

Overall, he believes it’s a step in the right direction.

“When they call and they can’t get something fixed and they have to wait there, desperate sometimes, and it’s upsetting and we want to try to help,” he said. “Instead of saying automatically, no, we can’t help you because of what this bill addresses now, we’ll be able to at least have that conversation.”

The F.D.A. authorizes Pfizer-BioNTech boosters for children ages 5 to 11.