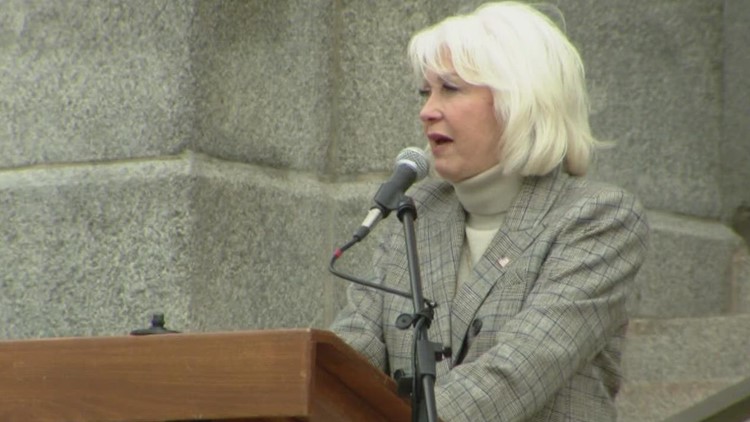 The newest complaint was filed by Anne Landman, who has also filed two other ethics complaints against Peters that are also being investigated by the commission.

The complaint, filed May 9, is largely based on answers MyPillow CEO Mike Lindell provided to 9NEWS during a visit to Denver on April 5 at an event promoting “election truth.”

At that April 5 event, 9NEWS reporter Marshall Zelinger asked Lindell about his contributions to Peters and her legal defense against felony charges for tampering with election equipment.

Zelinger: “Mr. Lindell, how much have you raised for Tina Peters legal defense fund?”

Lindell: “I just put all the money in myself.”

Zelinger: “How much is that?”

The complaint claims that Peters is violating the section of the Colorado Constitution that limits how much an elected leader can accept from someone who is not a relative or close friend. That amount increases with inflation and is currently $65.

In that April 5 interview, Lindell admitted that he was not a close friend of Peters in an exchange with Zelinger and Colorado Sun reporter Jesse Paul.

Paul: “I know that the state’s investigating the flights that you gave to Tina Peters, can you talk about how many times you’ve had her on your private jet? Or if you’ve given her frequently rides to places?”

Lindell: “What? On the cyber symposium, I give rides from people all over the country. I had never met Tina Peters. That’s the plane ride you’re talking about. She came to the cyber symposium with the group from Colorado. I picked people up. I invited all 50 states. All 50 states were represented. There’s your answer. Another stupid question by a stupid journalist.”

Zelinger: “If you had just met her, you weren’t a close friend of hers?”

Lindell: “I just met her that day. Another dumb question.”

The complaint also states that a previous ethics commission decision in 2013 requires the public disclosure of donor names and donation amounts.

The commission is also looking into two other complaints, also filed by Landman.

On Tuesday, the commission delegated subpoena power to a hearing officer to try to get answers from Peters that have not been provided.

The first complaint was about the flights she took on Lindell’s private jet. A stay has been issued in that complaint and is on hold pending the outcome of her criminal case in Mesa County.

Subpoena power was used in the ethics complaint against former Democratic Gov. John Hickenlooper, when he was refusing to testify in the complaint about multiple trips he took while governor. Hickenlooper did testify and was found to have violated the state’s gift ban twice while in office. He was fined $2,200, which was twice the amount of the benefit he received.

Peters has 30 days to respond to the newest complaint.

Like Hickenlooper, she could face a fine of twice the amount of the improper benefit.

Previous Ontario election day is June 2. Here’s how to vote
Next Madison Cawthorn Loses His Re-Election Bid in North Carolina