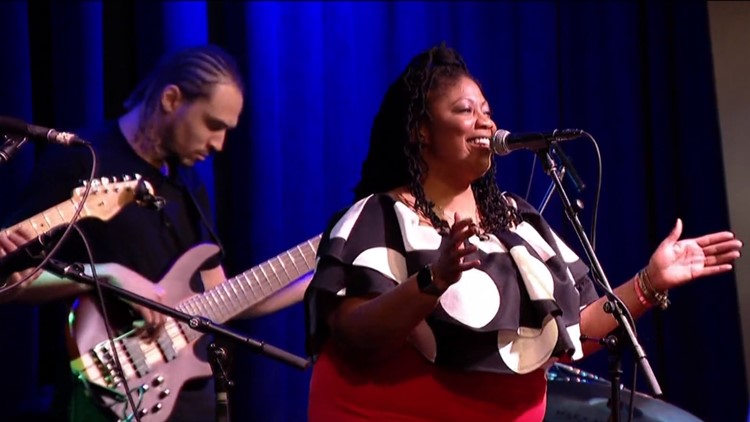 After several suicide attempts, Joslyn Ford Keel calls herself a victor in the battle against mental illness. Her music helps her continue the battle each day.

DENVER — One voice is all it takes to create a connection, and Joslyn Ford Keel realized when she became vulnerable with her voice, others saw themselves in her experiences.

On Monday at Dazzle, a jazz club in Denver, Ford Keel, who goes by JoFoKe on the stage, closed out the night with her band, Same Cloth.

The first song she sang takes her back to a journal entry she wrote in the psych ward of Vanderbilt University Medical Center.

Ford Keel now says when she takes the stage, she is “singing for her life.”

“When it feels like my good ain’t good enough, and when it seems like all my hope is lost,” she sang.

It took her a while to open up about her struggles.

“Mental illness isn’t something that’s talked about in my community,” she said. “Especially in the Black church we would say ‘well we’re gonna pray for you’, no one would admit that it was depression or even try and get diagnosed.”

But something inside her always said she must not be alone, and she began sharing about seven years ago in hopes of helping other little Black boys and girls.

Monday night’s concert was a musical tribute for mental health and they raised money for United Suicide Survivors International.

Their mission is to elevate the voices of people who have lived through a suicide crisis, and incorporate them in clinical settings.

“Well a lot of the clinical approaches to suicide prevention are often based out of fear and just restraining a person from acting on self-harm and we know that that doesn’t get to the root cause,” said Dr. Sally Spencer-Thomas, the president of United Suicide Survivors International. “What gets to the root cause is a sense of belonging, connection and feeling like your life matters.”

It’s stories like Ford Keel’s that Dr. Spencer-Thomas believes are needed beyond the stage.

“There is a freedom in knowing that sharing my story can very well help someone else,” said Ford Keel.

One voice means those listening might join in, and create a chorus of change.

JoFoKe and Same Cloth have a residency at Dazzle. Their next performance is May 28, and they’ll resume playing the last Saturday of every month in July.